A sense of uneasiness overcame me and anxiety filled my veins. The trees were eerily baron and the air stale. 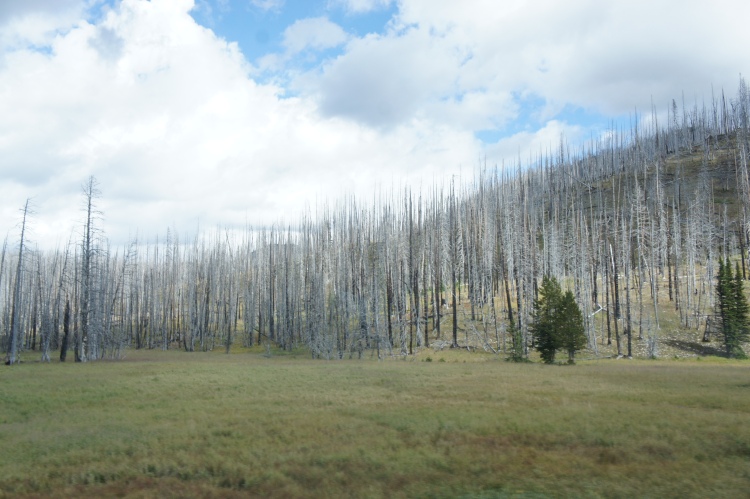 The spectacle was not as spectacular as I was expecting.

You hear stories of greatness and mystery. The mystery abounded and the greatness was in size. 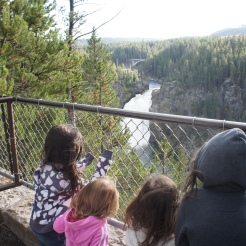 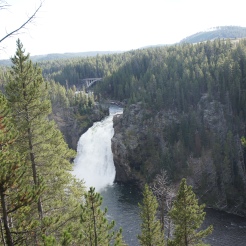 The size of the park and trees. The river. The lake. The waterfalls. The amount of steam heaving up and out of the earth. All great but not in a good way.

I thought it was my own fear and reservations about being in a seismic and active volcanic place but Darryl felt it too. (I found out later as we were leaving)

We got our education with a ranger led program about the wildlife in the park. Lemon learned “how to not get eaten by a bear.”

We camped in a dry slot in the woods outside the boundary of the caldera and were quick to leave in the morning without visiting the world-famous geyser, Old Faithful.

We did visit the mud volcano and had sulfuric steam blasted at our faces and that was enough of Yellowstone for us.

Getting up in the morning was a task because we wanted to leave as quickly as possible.

I had difficulty sleeping; tossing and turning in the night battling Papa Bear for the blankets as the cold air crept into our house.

We got moving before breakfast and as we exited the park our sense of road trip bliss returned almost instantly.

We snagged our Junior Ranger badges on the way out of Yellowstone and arrived at Grand Teton National Park within a few hours.

The overall feeling in Grand Teton is how I had imagined it would be in Yellowstone but I was sadly mistaken and disappointed.

After another ranger-led program and junior ranger badge pinned to the sash we walked in the woods and down along Jackson Lake to get some ice cream and to take a moment to soak in these mountains that are appropriately named “grand.” They are magnanimous and peaceful to just sit and look at.

We had another dry campsite which means we need to find water and service our tanks as soon as possible.

A busy morning of cleaning and packing up for the next leg of the trip through Idaho. Darryl was tired so he napped for a while. I drove and just 45 min. down the road I found a cute little town, Jackson, WY. I stopped so the girls could play at park and playground. They haven’t had much play time since we left Cody; we’ve been busy with national parks. They had a lot of fun just playing, making friends and running around.

Afterward, we continued west into the mountains on the steepest road I’ve ever driven. 10% grades up and down on the side of a gigantic rock.

I followed the road into Idaho Falls where Darryl found a FREE RV park. We setup camp and picnicked dinner at sunset before we slept well.

After breakfast and cleaning house we headed into Pocatello, ID for Costco and to restock our supplies. Almost an hour and a half and $400.00 later we were back on the road and after a stop in Twin Falls, ID for liquor and to print some pictures for our scrapbook, we made it to Hagerman where we had dinner, canvassed the fossil beds and found another free spot to spend the night.

Every morning is the same. One by one we wake up and rub our eyes. Juice. Cereal. Eggs. Coffee! And then I get the kids dressed while Darryl washes the dishes. We make beds, sweep the floor, walk the dog and the day is in full swing.

We drove a couple of miles down the streets of Hagerman, ID a small town consisting of a handful of shops and businesses. If you blink, you’ll miss it. We walked into the Fossil Beds Visitor Center where we learned about fossils(obviously) but also rocks, minerals, and the Oregon Trail. I especially enjoyed the exhibit on the World War II concentration camp nearby where Japanese Americans and their families were detained after the attack on Pearl Harbor.

More badges, a stamp in our Passport then lunch and rest time and we were off without a hitch.

We stopped in Boise for dinner where we took care of our tanks and showered. We pressed on some more before we parked for the night in Vale, Oregon, another new state under our wheels.

Sensing the morning, I awoke and nudged Darryl who was able to get us into OR further before the girls woke and we really started our day. I’ve been pressuring him to make it to Crater Lake for my birthday since Astoria was out of the question. The day was mainly spent driving with few exceptions to a playground, stop for lunch and fill-up the gas tank.

We ate dinner at a free campground outside the national park and made it to the Crater Lake Lodge just after sunset.

But not without experiencing THE. MOST. FEAR. I’ve ever had while driving. Rim Drive is a narrow two lane road with no shoulder or guard rails and barely hugs the side of the mountain that holds Crater Lake.

Some of the black top at the edge of the road has crumbled and tumbled down the side of the cliffs as I imagine we would have if there was oncoming traffic.

I was so scared my knuckles were white from clinging to the steering wheel.

I drove down the middle of the road and luckily there were only 3 cars that passed us the opposite direction and they did so when the road was wider with more room to maneuver around them. Like I said we made it to the Lodge at sunset and were not brave enough to challenge Rim Drive in the dark so we illegally camped in the Lodge’s RV parking lot. Rebels, I know.

A ranger kindly informed us of our infraction the next morning but the deed was done and we were unscathed.